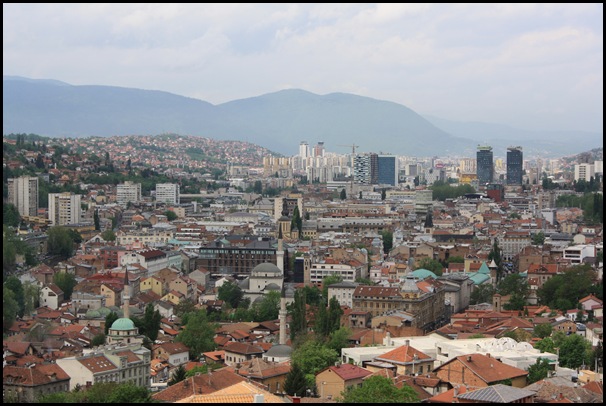 During the war in Bosnia and Herzegovina in the 1990s, most press correspondents huddled in the safety of the distinctive yellow Holiday Inn in Sarajevo, sending out second-hand dispatches to news outlets back home. Anthony Loyd was never going to do that. In his memoir My War Gone By, I Miss It So Loyd travelled across Bosnia and Herzegovnia during the war of 1992-1995 and spent time in Grozny at the height of the First Chechen War. Now, to mark the 20th anniversary of the signing of the Dayton Agreement, a new edition of Loyd’s memoir has been released with an updated foreword.

Armed with just a camera and pen, Loyd travelled over to Bosnia during the war after a stint in the military. Landing first in Sarajevo, he befriended a local family and spent his days dodging sniper bullets and trying to overcome the relentless boredom of war. Eager to see the frontlines, Loyd later travelled to various towns and villages in central and northern Bosnia where he met up with other members of the press corps and began to eke out a living as a war correspondent.

Loyd’s writing is brutally honest and in many passages he describes scenes and photographs that many of us would look away from or avoid. That is not to say that I don’t want to know, I really do, but at times his descriptions were so intimate and graphic that I felt somehow wrong reading the passages, as if I had somehow violated someone’s privacy. Such is the power of Loyd’s writing.

At many times in the memoir, Loyd mentions his eagerness to support the Bosniak cause on a moral level, to view them as the underdogs, but even this explicit bias is tested from time to time by the atrocities he sees. The saying goes that all is fair in love and war but that is utter rubbish, and what Loyd witnesses proves that all is twisted and futile in war instead.

It was the scenes in Grozny that were perhaps the most shocking. I’ve read a fair amount about the wars in the former Yugoslavia and felt somehow familiar with the subject matter when Loyd described his time in Bosnia and Herzegovnia. The chapter on the conflict on the ground in Grozny was disturbing to say the least. Loyd travels to the Chechen capital days before the fall of Grozny in February 1995 and what he witnesses is the utter meaningless and futility of war. It is especially moving in light of the way that history ultimately played out for the Chechens.

Again, my view of events in Bosnia might be influenced by all that I have read about the war and history of the region in the past but the only aspect of Loyd’s memoir that concerned me was his tendency to takes sides in the conflict. It is true that history and the subsequent trials have pretty much confirmed what he wrote almost 20 years ago but throughout the memoir I couldn’t shake the feeling that it would have been preferable if he had maintained a slightly more objective position.

In the foreword to the new edition, Loyd remarks how young and angry he was at the time of writing. It is interesting because while I might fault his objectivity, I never would have faulted his perspective which was infinitely more nuanced than anything I would have written back in the mid-90s when I was roughly the same age as him.

Nevertheless, I was riveted by the book from cover to cover and would highly recommend it to those interested in accounts of war or in the conflict in Bosnia and Herzegovina in particular. Like the timeless photographs to which Loyd refers in his memoir, his book provides a unique glimpse into one of the most disturbing conflicts of the 20th century.