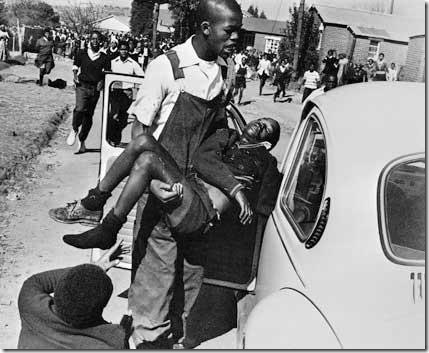 On 16 June 1976, thousands of black South African students staged a protest and walked from their schools to Orlando Stadium in Soweto.  They were protesting against the Afrikaans Medium Decree of 1974 which forced tuition to be given in a 50/50 split between English and Afrikaans in schools.  Not only was Afrikaans the language of their oppressors, it was also a language that many black South Africans did not understand as they primarily spoke one of the black African languages such as Zulu, Northern or Southern Sotho or Xhosa.  Part of the Apartheid policy was to allocate fewer resources to black schools as well and to make them purchase their own textbooks and exercise books whereas these were freely distributed in white schools.  The effects of teaching in Afrikaans in already disadvantaged and inferior schools was devastating.

On the morning of 16 June 1976, protesting children found that their route to the stadium was blocked by a police barricade.  There are conflicting reports as to how the first shot was fired and whether it was provoked.  Some say that the children began throwing stones, other simply say that the policemen got spooked.  Once that first shot had been fired though, children ran screaming in different directions, terrified and panicked.  More shots were fired and by the end of the day, 23 people were dead (two of them were white people).

Hector Pieterson is the little boy being carried in the photograph above.  He was one of the first children to be killed that day.  Perhaps even more heartbreaking is that the boy carrying him was 18-year-old Mbuyisa Makhubo.  He was harassed so much by the police that he went into hiding after the event and his mother has not heard from him since 1978.   I imagine he is but one of the thousands of victims that “disappeared” in the Apartheid years.

The resulting violence after the shootings that day became known as The Soweto Uprising or Soweto Riots.  Between 200 and 600 people died in the violence and thousands were injured.  June 16 is commemorated each year as Youth Day and services and events are held across South Africa to honour their youth and to remember all that was lost during the Apartheid struggle.