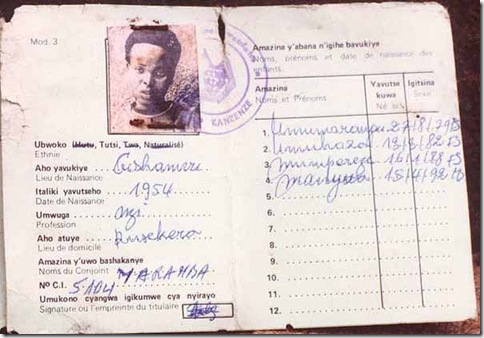 The Rwandan genocide began on 6 April 1994 when the plane carrying President Juvénal Habyarimana was shot down from the sky, killing all on board.  Over the course of the next 100 days, 800,000 Tutsis and moderate Hutus were murdered.  While the assassination of President Habyarimana was certainly a catalyst, it did not cause the genocide.

Owing to their systematic and intentional nature, genocides, by definition, are rarely caused by underlying factors, as such.  Rather, underlying factors are manipulated and exploited in the planning and preparation that goes into the act of genocide. (See: What is Genocide?).

In Rwanda, evidence shows that militia had been trained, machetes flown into the country and weapons had been stockpiled for several months before the genocide started.  Much has been made of the role of the media in inciting genocide in Rwanda, with singers, radio presenters and journalists all calling for the extermination of the Tutsi cockroaches.

1. Every Hutu should know that a Tutsi woman, whoever she is, works for the interest of her Tutsi ethnic group. As a result, we shall consider a traitor any Hutu who

2. Every Hutu should know that our Hutu daughters are more suitable and conscientious in their role as woman, wife and mother of the family. Are they not beautiful, good secretaries and more honest?

3. Hutu women, be vigilant and try to bring your husbands, brothers and sons back to reason.

4. Every Hutu should know that every Tutsi is dishonest in business. His only aim is the supremacy of his ethnic group. As a result, any Hutu who does the following is a traitor:

5. All strategic positions, political, administrative, economic, military and security should be entrusted only to Hutu.

7. The Rwandan Armed Forces should be exclusively Hutu. The experience of the October 1990 war has taught us a lesson. No member of the military shall marry a Tutsi.

8. The Hutu should stop having mercy on the Tutsi.

9. The Hutu, wherever they are, must have unity and solidarity and be concerned with the fate of their Hutu brothers.

10. The Social Revolution of 1959, the Referendum of 1961, and the Hutu Ideology, must be taught to every Hutu at every level. Every Hutu must spread this ideology widely. Any Hutu who persecutes his brother Hutu for having read, spread, and taught this ideology is a traitor.