This is the article I posted for Freedom Day last year. I was going to do a brand new one and then realised that this basically says it all. I am still so proud of South Africa.

27 April is Freedom Day in South Africa and it is a public holiday held to commemorate 27 April 1994 when the first democratic general election was held in the country. This election marked the end of Apartheid where the National Party government was replaced by the government of the African National Congress and Nelson Mandela became president.

It was the first ever election in South Africa in which there was universal suffrage which means that all adult South Africans, regardless of race or gender, were allowed to vote. 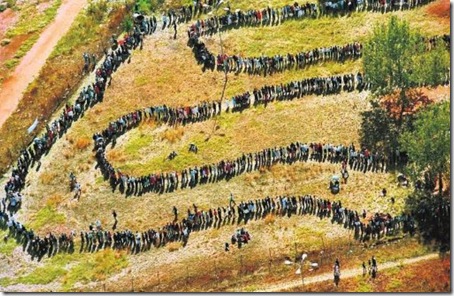 Apartheid
Most people today have heard about Apartheid but I wonder if everyone knows what it was like? Apartheid officially began in 1948 but certain laws dated to before that time and were vital parts of Apartheid legislation. The 1913 Native's Land Act prevented non-white people from owning land. Not only could they never own the land they lived on, they could be forcibly removed from any land that was deemed attractive for white settlement (see District 6). This law was enhanced in 1950 by the Group Areas Act which assigned different racial groups to different residential and business areas in urban areas. Hence, blacks, whites, coloureds and Indians in South Africa could not live together, could not own businesses in the same areas and only whites could own land.

The second piece of important pre-Apartheid legislation was released under the Jan Smuts government. It was called the Native Urban Areas Act of 1923 and it deemed urban areas to be "white" areas and all black adult men had to carry passes at all times if they were in cities or urban areas. A statue of the lovely Jan Smuts now stands in parliament Square in London and he looks out over the square to where Nelson Mandela's statue now also stands. This law was also enhanced by the 1952 Pass Laws Act which made it compulsory for all blacks South Africans over the age of 16 to carry a pass book at all times. The book would stipulate where, when and for how long a person could remain in a specific urban area and it greatly restricted where black people could move or visit.

The final bit of despicable legislation I will talk about today was the 1949 Prohibition of Mixed Marriages Act which prohibited interracial marriage in South Africa and the 1950 Immorality Act which prohibited all sexual relations between whites and non-whites. These laws were repealed by PJ Botha in 1985 but up to that time, people could be arrested and prosecuted if they were caught having sexual relations with a person of another race and black people often got stronger sentences than white people.

The Beginning of the End
In the early 1980's, international economic sanctions had begun to take their toll on Apartheid and that was the beginning of the end. Little by little President PJ Botha began to repeal laws and offer greater freedoms to the Indian population and to blacks and coloureds too. The separate and completely unequal policies and privileges offered to the different population groups under PJ Botha are quite complex and the topic of another post, but in 1989 PJ Botha had a stroke and FW de Klerk became president. He began a process of reform which culminated in the unbanning of the South African Communist Party and the African National Congress on 2 February 1990 and the release of Mandela on 11 February 1990.

A national referendum was held on 17 March 1992 in which white people voted whether they wanted to continue the process of reform started by FW de Klerk two years earlier. We knew what the stakes were and the basic question was really, "will this be the last whites-only election before universal suffrage is awarded and national elections are held"? 2.8 million people voted and the result was 68.73% "Yes".

The Road to the Elections
The next two years were emotional and tumultuous for our emerging rainbow nation. There was so much intimidation and violence going on around the elections that people were advised never to divulge who they were voting for. It was our right to keep our vote private. Many of the young, black females that I worked with were too scared to vote, even though we offered to drive them to the election stations and hide them in our cars. This was worrying - we needed every single vote. I still won't divulge who I voted for or what my preference was, but the important thing was to vote!

The Day
As the photo above shows, South Africans stood for hours and hours in queues that day to vote. I myself stood for four hours in a queue that ran the whole way around the northern Johannesburg suburb of Craighall. I got to the front of the queue and stood for several minutes in the booth. My hand was shaking so much that I was scared to try to write in case I spoiled my ballot. I cast my "x" on the regional and national papers, posted my ballots in the box and burst out crying. I was so overwhelmed and so acutely aware of the importance of what had come to pass that day. I was one of the 19,533,498 people who changed the course of world history that day.

The rest, as they say, is history. The ANC won 62.65% of the vote and Nelson Mandela became the first president of the New South Africa. At some stage I hope to elaborate on what it was like to live in Apartheid South Africa.