This is the first in a series on A Decade of Conflict Leading up to the Arab Spring.

Also known as the Al-Aqsa Intifada.

Violence and protests erupted when Ariel Sharon, then an Israeli opposition party leader, entered the Temple Mount / Al-Haram Al-Sharif area (a disputed area which has significant religious importance to both Jews and Muslims) and stated that "the Temple Mount is in our hands and will remain in our hands. It is the holiest site in Judaism and it is the right of every Jew to visit the Temple Mount".  This was seen as extreme provocation and the grounds for years of conflict and unrest. 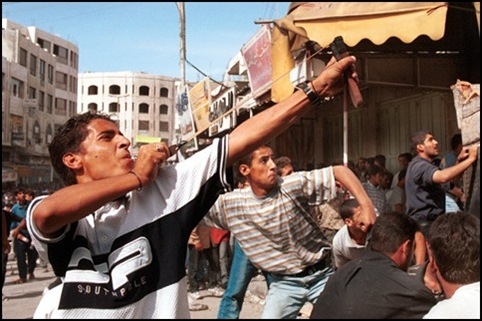 Depending on which source you consult, the Israelis and the Palestinians are painted as the primary aggressors, with both sides using questionable tactics. For example, the overview section on Wikipedia notes the Palestinians’ use of suicide bombings, rocket and mortar attacks, lynchings, kidnappings shootings, stabbings, stonings and assassinations.  The Israelis are simply painted as imposing checkpoints and curfews (see: “Second Intifada: Overview”).

Both sides refer to events such as the Muhammad al-Durrah murder (caught on camera by a French cameraman), the Ramallah lynching, the murder of Israeli teenager Ofir Rahum, and the battle of Jenin to further support their position.

Perhaps the figures speak for themselves?  In the Introduction section of the same article, Wikipedia cites B’Tselem statistics of a final death count of up to 5,500 Palestinians, 1,100 Israelis and 64 foreigners.

In the first few days of the clashes in September 2000, Israelis responded to stone throwing, riots and demonstrations with both live fire and rubber bullets and the death toll rose from 7 Palestinians in the first day to 47 after five days.  Amos Malka, then head of Israeli military intelligence, is famous for stating that 1,300,000 bullets were fired by Israeli soldiers in that first month alone.

“By the end of the year, at least 275 Palestinians had been killed and thousands had been wounded, along with 19 members of the Israeli security forces and five Israeli civilians, according to the Israeli human rights group B'Tselem.

Palestinian stone-throwers were met with Israeli snipers; gunmen, with helicopter gunships and tanks. What began as a popular protest movement quickly began to look like a war…

… Demonstrations were being met with overwhelming force by Israel and it made popular protest impossible.” - Al-Jazeera, "Remembering the Second Intifada"

After a year, Palestinians took to suicide bombings and sniper attacks.  The attacks were said to have a significant psychological effect on both Israeli military and civilians.  By the end of 2004, there had been 135 attacks and more than 500 casualties but nowhere near how many Palestinians were being killed by Israeli armed aggression.

“Israel's campaign to suppress the uprising took a heavy toll on ordinary Palestinians.

Significantly, the Palestinian leadership was also decimated by a concerted campaign of assassination.” - Al-Jazeera, "Remembering the Second Intifada"

Indeed, there were 273 assassinations of Palestinian leaders by Israeli undercover units, the most notorious being the July 2002 bombing of a compound that killed Salah Shehade, commander of the Izz ad-Din al-Qassam Brigades along with 15 other people including Shehade’s wife and his nine children.

The bombing was thought to be so barbaric that it inspired the “Pilot’s Letter”, a signed declaration by several Israeli air force pilots that they would not conduct bombing campaigns over Palestinian occupied territory.  However noble, the letter was roundly damned by the Israeli military with several pilots being fired in both military and civilian sectors and more being forced to retract their signature.

The Second Intifada was a long and protracted period of conflict in which the primary casualties were civilians.  Israeli forces were indiscriminate in their reprisals against suspected terrorists while Palestinian attacks specifically targeted civilian populations.

It is important to understand how these events were viewed by people in the Middle East and the role these sentiments played in the Arab Spring.

Intense media coverage by Al-Jazeera inspired Arabs and lead to solidarity protests across the Arab world. The protestors identified with and supported the Palestinian cause and they were disappointed in their own leaders for not using their influence with the USA to assist against perceived Israeli brutality. Protests, attacks and flag burning occurred in Lebanon, Tunisia, Egypt and Syria.