Greenwood District, Tulsa, Oklahoma was once home to a thriving African American community. On May 31st and June 1st 1921, a mob of armed white Tulsans attacked the community, killing as many as 300 African Americans and displacing 8,000 more. 2021 will mark the 100th anniversary of what became known as the Tulsa Race Massacre, the history of which was suppressed for seventy-five years.

Unspeakable: The Tulsa Race Massacre is a picture book by author Carole Boston Weatherford and illustrator Floyd Cooper. It's short at 32 pages but aims to help young readers understand these terrible events so that "we can move toward a better future for all". It's aimed at the 8-12 years age group.

Reading Unspeakable: The Tulsa Race Massacre was physically painful. In the beginning, the book describes the thriving community of Greenwood District and the high street that became known as the "Black Wall Street". The descriptions of culture, fashion and community reminded me so much of what I've read about Sophiatown and District Six in South Africa, communities with vibrant cultures that were similarly razed to the ground.

Weatherford has done a fine job of simplifying the events for young readers, but presenting sufficient detail to draw older readers into healthy debate and discussion. It would be a good platform to stimulate further research and self-study too. The author's and illustrator's notes were particularly interesting, detailing their personal reasons for being involved in this work. Of particular note is the author's comment that the event was not even taught in Oklahoma schools until the twenty-first century. 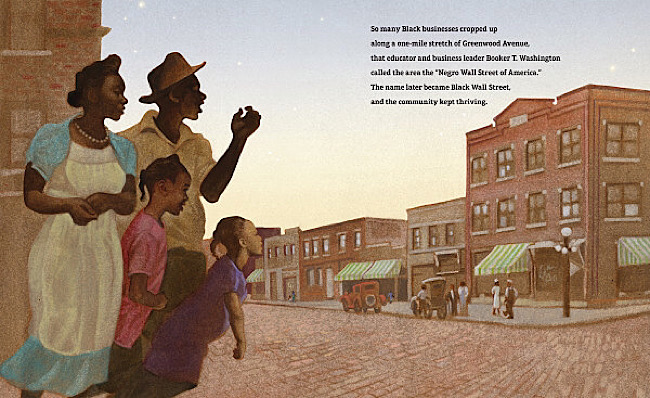 The illustrations by Floyd Cooper are exquisite, showcasing the fashions and vibrancy of Greenwood District, and ultimately the violence and devastation. The illustrations do a great job of bringing the events and people to life, ensuring that the reader relates to them and to the injustice of the events.

Unspeakable: The Tulsa Race Massacre is published by Carolrhoda Books, an imprint of Lerner Publishing Group

I would wholeheartedly recommend this book and am pleased to note that it's being released in both the US and UK (and presumably around the world).

An advance, electronic copy of this book was provided by Netgalley for the purposes of this review.