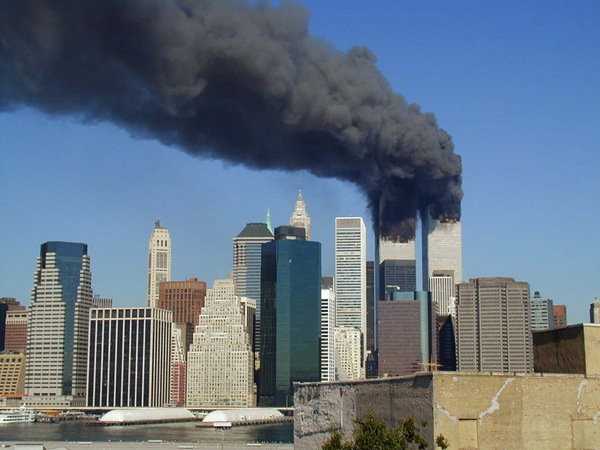 I just finished reading 102 Minutes. I'm in a bit of a hurry, so I'm not going to link to it right now. It is about September 11th, 2001, about the attack on the World Trade Centre. It traces, through oral history and radio transmissions, the 102 minutes between the first plane hitting the north tower, through the south tower being struck and collapsing, to the collapse of the north tower. The book was really well written and absolutely fascinating. And heart-breaking. And it makes you furious all over again, and then just sad.

Stephen gets uncomfortable when I get so drawn in by these things. We're in a catch 22 situation. I read non-fiction, I get drawn in and for just a while my world is filled with investigations into whatever it is I am studying.

But is that really unusual? My world has been constructed on the very premise of Never Forget.

And on Friday night dinners, we always set a place for the Russian Jews. For the people who could not be there. We were never to forget that there would not be freedom until all Jews were free, and then until all were in Israel.

Much closer to home - Hillsborough Disaster. It's hard to explain. But up there, where my Dad lives, football runs in your veins, its in your bones, your very make up. Everyone felt that loss, whether they knew someone who died or not. And again, the message. Never Forget.

Growing up in that time, in that spirit, I have sat back in utter dismay to see Kuwait, Rwanda, Bosnia, Sudan, Zimbabwe. Have we not learned anything? We've not learned a thing.

Never again can we limit education, health care or housing, based on the colour of one's skin. Or any other basis of religion, race, gender, nationality, language, sexual preference.

Most important to me, and many people I know struggle to understand this, is the lessons we learned from Apartheid. Never again can we let people be kidnapped, raped, murdered, imprisoned, destroyed like that again. Never again can we limit 90% of our population to the most barren, unproductive, overcrowded land. Never again can we limit education, health care or housing, based on the colour of one's skin. Or any other basis of religion, race, gender, nationality, language, sexual preference. For as long as what happens in this country protects the rights of our people, then that is okay. People say South Africa is going to become a Zimbabwe. If that means the poor are rewarded, then that is fine. If it means large scale genocide and ethnic cleansing, which is happening in Zimbabwe, then not on my watch.

So when Stephen becomes uncomfortable at my morbid nature, at my dissection of the past and obsession with the facts, I can only think that it's not even enough. All I can do is learn and remember, especially with past events, events that occurred in other countries. Gosh. Can you imagine 3000, or even 300 000 people dying and the world being too embarrassed to remember? Of course not. That is ludicrous.

The past two weeks it took me to read 102 Minutes (there, I linked to it), I have remembered the shock and horror of that day, I have remembered watching the second plane plough into the second tower and thinking it was a replay. Until they replayed it. I've remembered innocent people and heroes, the loss and the seeping realisation that the world would never, ever be the same again. I remember realising it was intentional. I've been reminded of the anthrax scares, of the massive changes we have gone through in five years. Panic, fear, hate, anger, shame. The world is not the same place, our children are being born into a frightening time.

And what makes this time different for much of the 20th Century is that in those times we tried to convince ourselves that we could prevent world war, that we could solve world hunger, that there were such things as diplomacy and a greater good. From the world wars to the cold war, there was this general world idea that we could and would achieve world peace. Or at the very least, we would know we died trying. Now... now it is different, because there can no longer be faith and hope in the face of world terror, greed and hate.

Genocide, ethnic cleansing, terror. The super-rich - Donald Trump, Bill Gates. Megalomaniacal world leadership - Blair, Bush. This is the gift we give our children. I think I preferred my gift of Never Forget.